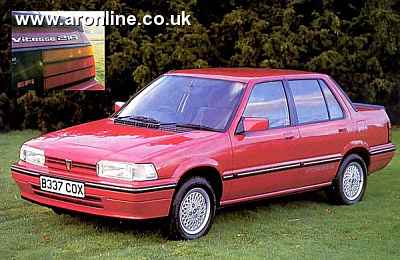 I probably didn't take any pics of this one because I couldn't afford film for the camera having spent all my money replacing the engine, so here's a pic borrowed from the net!

After the MG went back to the garage permanently I needed a car badly to get to work and back every day. There was only one way to do this which was my first ever auction purchase! Having been to the auctions a LOT as a child I knew what the deal was however bidding on my own car was still pretty terrifying, however bid I did and I managed to come away with a Red Rover 216 SE (the square version) for a measly £800.

It was an OK car however it did leave me stranded a couple of times, once on the A47 roundabout at Acle in rush hour when the engine cooked and seized up however 1 engine later it was all good to go.

Sadly in 1996 it was attacked by a vicious BMW 3 series and lost it's life.....along with several of mine. The result of the crash was that most of the front of the car was missing and the engine and gearbox were pushed quite a way back. Happily the insurance paid out a grand more that it cost me but sadly that was the end of my Rover.